Over €1.4 million spent on legal and consultancy fees for South Kerry Greenway so far

Kerry County Council has spent over €1.4 million on legal and consultancy fees for the South Kerry Greenway so far.

An Bord Pleanála granted approval for the 32-kilometre greenway and associated compulsory purchase order in late-2020.

Following a Freedom of Information Act request, Kerry County Council released information relating to all fees paid to companies and individuals who provided assistance during the project so far.

This includes costs associated with a four-week oral hearing in late-2019.

In total, €1,440,000 was spent by the council on engineering consultancy and legal fees.

Two engineering consultancies, Malachy Walsh and Fehily Timoney, were paid over €250,000 each for services, while Michael McGough - who drafted many of the project's drawings - received €184,000. 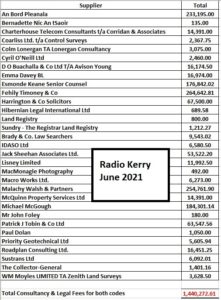 €210,000 allocated to 11 Kerry projects to support adventure and rural tourism