The Mayor of Kerry says councillors who consistently vote against local property tax increases but welcome projects, that are funded by the tax, are being hypocritical.

Fianna Fáil councillor Jimmy Moloney, who’s Cathaoirleach of Kerry County Council, has welcomed the announcement of state funding of more than €1.6 million for Listowel and Killorglin.

Projects in both towns are being supported under the Rural Regeneration Development Fund.

Cllr Moloney says in addition to this funding from central government, Kerry County Council is also allocating some €240,000 for the initiatives in Listowel and Killorglin.

Jimmy Moloney says the amount of council funding is made possible through the local property tax.

He says no councillor likes to support increases to the LPT but such decisions are necessary for the county’s overall well-being.

The funding announced is for the Listowel ‘Where Stories Begin’ project which includes plans to renew the town square and to help connect the North Kerry Greenway with the town centre.

The funding for Killorglin will develop the derelict former courthouse into a heritage and cultural centre.

It’ll also help transform a building into a hub for tourism, education, training and co-working.

Shane McElroy, chair of Killorglin Chamber Alliance, says this building is not the former Bank of Ireland branch which closed at the end of last year. 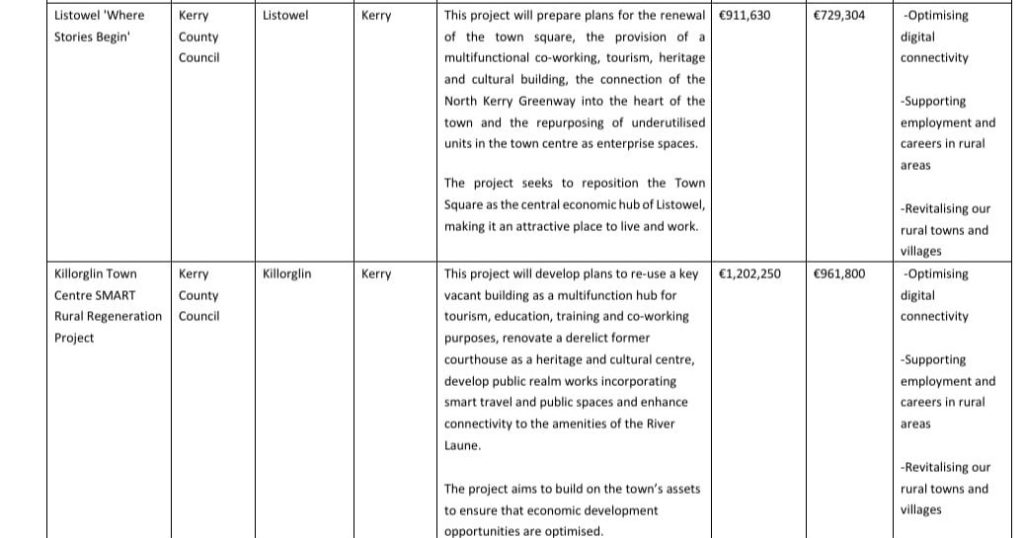