A 74th minute point condemned Kerry to defeat against Offaly as the Kingdom came from ten points down to draw level late on in the Joe McDonagh Cup.

It finished Kerry 2-28 Offaly 4-23 in Tralee in as good a game as is likely to be seen this year.

Offaly had the opening point in the second minute and very quickly doubled that advantage. Fionan MacKessy hit back for the Kingdom immediately and it was 2 points to 1. The sides then swapped points, Eoin Ross on target for Kerry. After 6 minutes it was 3 points to 2 in favour of Offaly, who then goaled to move 4 clear 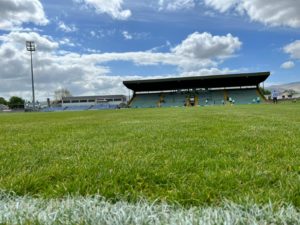 Kerry were 3 points down when a penalty gave them the perfect chance to equalise, but no joy for Shane Conway
Kerry did keep in touch with the visitors, making it 1-7 to 0-8 at the 19 minute mark. Disaster struck for the Kingdom in the 21st minute as they conceded another goal It was 2-7 to 0-10 after 24 minutes. The sides went on to share 6 points, with 3 still the difference at the half hour mark. It remained a one score game at the break; Kerry 0-15 Offaly 2-12.

Kerry sub Jordan Conway put over back to back points upon the resumption to make it a one point game. Offaly doubled the advantage but 2 Padraig Boyle points had the sides level; Kerry 0-19 Offaly 2-13 after 40 mins. Kerry then led for the first time when Shane Conway put over. The same player put the Kingdom 2 to the good but the concession of another soft goal had Offaly back in front It was Kerry 0-21 Offaly 3-13, with 45 minutes on the clock, and Offaly had the next 4 points to pull 5 clear entering the final 20 minutes. Offaly remained on top, adding another 1-2 to go ten ahead at 4-19 to 21 points after 55 minutes. A Maurice O'Connor goal helped Kerry halve the deficit It was Kerry 1-23 Offaly 4-19 after 58 mins. After Offaly put 6 between the sides Maurice O'Connor nabbed his second goal of the day to halve that deficit Offaly pointed but Kerry grabbed one of their own and it was Kerry 2-24 Offaly 4-21 with 4 minutes to go. The gap was also 3 points entering added on time; Kerry 2-25 Offaly 4-22. Kerry's Padraig Boyle pointed, quickly followed by a Jordan Conway point and now there was just a single point between the sides. A Colin Walsh point drew Kerry level but Offaly were back in front straight away with a point of their own after 74 minutes. That proved to be the winner.

Meanwhile Carlow have picked up their second win of the campaign with a 2-25 to 1-19 win over Down at Netwatch Cullen Park.

Kerry Senator meets with Ukrainian President on trip to Kyiv