Garvey’s Tralee Warriors made it three from three as they saw off the challenge of C&S Neptune at the Tralee Sports Complex. In a game that ebbed and flowed for the first three quarters with little between the sides throughout it was a trademark three pointer from Fergal O’Sullivan with three minutes to go that put the Warriors into a game winning position.

The Warriors started brightly with Aaron Calixte and Stephen Bowler on the mark to open up an early 9-6 lead but Nil Sabata added four scores from inside to push Neptune 12-9 ahead. Calixte, Nikola Roso and Keelan Crowe combined to edge the Warriors back in front before Miles Washington and Roy Downey found their range to see Neptune 23-20 to the good. However two late efforts from Roso and Daniel Jokubaitis had the Warriors 24-23 up at quarter time. 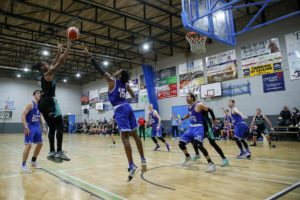 Brandon Cotton opened his account with a brave drive to the basket early in the second and a three from Calixte suddenly had the Warriors 8 up. But Neptune then went on something of a run with Miles Washington and Cian Heaphy finding the space to drive to the board with some ease and take back a 36-35 lead for the visitors. Washington picked off another easy score but Calixte was yet again the go to man for the Warriors with a score, two from two from the line and a showstopping three to see the home side 42-40 up at half time. 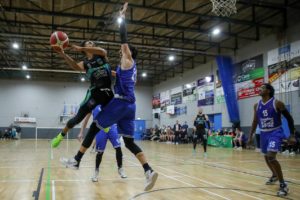 Fergal O’Sullivan fired in a three in typical fashion to kickstart the third quarter but Sabata and Washington were continuing to find a path to the board before captain Roy Downey was in range again to bring the sides level. Daniel Jokubaitis arced in a delightful three to wrestle the lead back for the Warriors before Calixte weaved his way to board for scores either side of another super effort from distance. But Neptune kept the hosts in sight with a three from Gary Walsh and scores from Washington and Heaphy restoring parity. Jokubaitis added six to the Warriors tally late on but Sabata and Scott Hannigan combined to edge the visitors 66-65 ahead turning for home. 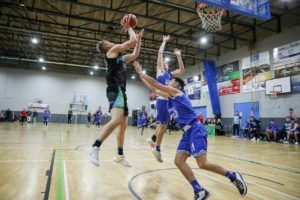 The Warriors were back in front early in the final quarter through Nikola Roso and Brandon Cotton but Cian Heaphy carved his way to the basket with two identical efforts to see Neptune edge ahead again. The outstanding Calixte then arced in a stunning three, stepped inside to add another and when Roso dropped in from close range the Warriors were 78-76 with three minutes on the clock. Gary Walsh found himself in open space for Neptune but crucially his effort from beyond the arc rimmed out. The rebound found its way to Calixte who fired a super pass to find Fergal O’Sullivan open in the corner and the team captain duly obliged with a three pointer that had the Warriors faithful on their feet. Neptune’s brave effort throughout the contest was undone in the final minutes as team fouls saw Roso walk the court on four occasions landing 7 from 8 free throws to secure the Warriors 88-78 win. 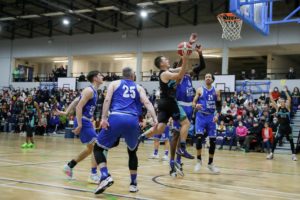 Next up for the Garvey’s Tralee Warriors is the eagerly awaited InsureMyHouse.ie Pat Duffy National Cup clash with Tradehouse Central Ballincollig at the Tralee Sports Complex on Sunday next, 31st October, with a 2.00pm tip off.

Munster Rugby minus 14 to arrive in Ireland this evening

Gardaí investigate discovery of man's body in a car in Abbeydorney