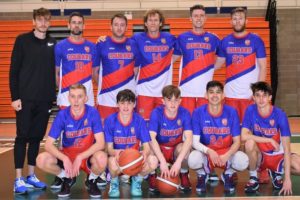 A thrilling contest at the UL Arena saw Eagles come from behind with a strong finish as Cougars led by 4pts entering the final minutes. Eagles American Manny Payton hit 21pts in the closing quarter to bring his tally to 43 points.

While last weekends game with the Limerick Celtics was a free flowing shoot out, this Round 2 clash, played at the splendid Fr Matthews Arena in Cork, was a more abrasive and physical affair. The home side, using an obvious size advantage, set about their task in an intense manner and the Lakers found it difficult at times to live with. With constant pressure on every pass and shot everything had to be inch perfect but unfortunately all too often in the first half this was not the case. Top scorer Emilian Grudov must have thought he was in Times Square such was the lack of wiggle room in his playground but his perseverance did eventually pay off in the end. The second half was a big improvement on the first as Fr Matthews shot into an early lead 17-4 before a mini revival, led by Senan O Leary(with a 3 pointer) and Ben Miller, got things tighter. With the score looking a bit healthier at 20-11 near quarters end it had the look of a weathered storm. But between the closing moments of quarter 1 and opening minutes of quarter 2 Fr Matthews went on a 10-0 scoring run to open up a 30-11 lead. This in truth was probably the most crucial period of the game as that cushion was always there for them. But credit where its due Lakers displayed, and not for the first time, likeable spirit. The strength of Mark O Shea, allied to good baskets from Jamie O Sullivan and Miller, again cut the deficit in half. But this only served to awaken the home beast who went on another scoring burst to leave the half time score 45 to 24.

As mentioned earlier Grudov found the opening half tough but he attacked the second half with gusto accounting for the majority of his 29 points in this period as Coach Jarlath Lee tried different combinations on the floor in an attempt to eat into the lead. This afforded Dianus Varanauskas and Keelin Houlihan alongside Lorcan Keane more game time and at one stage the gap was back to 14(50 to 36) but this was as close as it got as the imposing Fr Matthews team, led by Jonathan Garcia, David Murray and Jack O Mahony, started to slot home energy sapping 3 pointers. With the race run it afforded the Lakers bench some game time and undoubtedly the highlight of the evening was the first National League points scored by young guns Jason Lee and Daniel Carroll. Whilst defeat is always hard to take ,the closing minutes and the presence of these young players on the court is the reason why the club has embraced the philosophy of bringing through the Academy players. It should also be noted that the early loss of Paul Clarke, through injury, was a big factor as his height and strength were badly missed under the boards while Rui Saravia did not enjoy his most fruitful evening and is capable of so much more. The next league outing for the Lakers is away to the Waterford IT Vikings on Saturday November 6th.

Coach Jarlath Lee was disappointed by his teams inability to play solid defense.
"We were very disappointed by our inability to rebound, sometimes losing the 2nd, 3rd ball and overall playing a little soft at times. But we know we can defend, we only conceded 9 points in the 3rd quarter and last week we scored over 100 points ,so we know we can score. It's just a case of putting it together and also cutting out the turnovers".

Next weekend sees the Presidents National Cup campaign kick off with a Preliminary Round game vs Portlaoise Panthers.This will be played at a Killarney venue on October 23/24 with a time TBC. The Panthers have lost their opening two leagues game to Limerick Sports Eagles and Carlow IT. They will be relying on Gary Morrissey, Nelson Larmins and Ian Lynch to help them progress to the first round proper but Mark O Shea and Co. will hope to have something to say about that. The last time Portlaoise visited Killarney they went down to an Aaron Jackson led Lakers 101 to 78.

Today in Round 2 of the Insuremyvan.ie Mens Super League Garvey's Tralee Warriors are away to Moycullen from 3.
Alan Cantwell reports

Aki out for Connacht for Champions Cup opener

Thousands remain without power in Kerry