Over quarter of a million euro was spent maintaining four Kerry County Council diggers over a five-year period.

The JCBs, which are all 23-years-old, are maintained by both council staff and third-party contractors.

Operator costs were not included.

Over the five-year period, one JCB burned €1,884 worth of fuel and had maintenance costs of €57,298, meaning every euro of fuel burned equated to over €30 in maintenance.

As a group, every euro of fuel used by the four JCBs equated to €5.13 in maintenance costs.

Kerry County Council says it manages the maintenance of over 180 items of plant and there are limited occasions where extensive repairs may be required to a vehicle.

On occasions where plant is operating in a challenging it can be necessary to replace parts which suffer exceptional corrosion.

It adds that, while significant progress has been made on delivering efficiencies in staff operations, negotiations with unions through the Workplace Relations Commission have yet to be finalized.

Over quarter of a million euro was spent maintaining four Kerry County Council diggers over a five-year period.

The JCBs, which are all 23-years-old, are maintained by both council staff and third-party contractors.

Can you give us some background to this?

A while back, I compared the maintenance costs of these machines against the fuel burned for 2018.

However, to give a fuller picture, I sought maintenance costs for a five-year period for the four machines: 2015-2019.

In 2019, information given at a monthly meeting showed the JCBs had between 8,100 and 18,000 hours each, meaning the least used machine averaged 385 hours per year over its lifetime. 8,100 is not a large number of hours for a machine of that vintage.

Operator costs are not included in those totals.

When you were calculating the overall maintenance costs for the four JCBs, what did you take into account?

Kerry County Council keeps an individual record for each machine under what’s called an Agresso report. I sought these reports for each machine over the period. These reports broke the costs down and I put them into three categories: transfers from machinery yard, external contractors and itemised costs which are issued from stores.

However, there are a number of itemised costs as well, which I’ll go through soon, and there are also external contractor costs.

Can you give us an example of what maintenance costs a machine would incur during a typical year?

In this case, I’ll pick what I think is closest to the average. Listeners can see all this information and more on the website shortly.

That’s a sample of the costs for this particular machine during 2018. I understand a number of items caught your eye on this?

Three wheel rims: two in February and one in May.

I got the daily driver check sheets for this vehicle for the entirety of 2018. Every week is filled in and dated. All boxes ticked reveal the machine had no defects or repairs needed. During February 2018, the machine was assigned two wheel rims at a cost of €960. There’s no mention of a defect on the sheets from January 1st, 2018. Every daily mention of wheel and tyre condition has a positive tick next to it, highlighting there were no defects noticed. It was similar in May when the machine was assigned a third wheel rim.

Numerous HSA reports from early in 2018 show that the JCB was in good working order. These reports were weekly.

Over €600 spent on a dash cluster assembly in March, yet another €111 was spent in November on the same thing.

Maybe this machine was doing a lot of work during both 2018 and 2019? What were its fuel costs?

I know those figures seem a little arbitrary so I contacted a number of contractors around the county who have or had similar machines. For a machine that’s working for most of the year, a fuel bill between €8,000 and €12,000 is expected. The variation depends on what work the excavator is doing. The contractor said a fuel bill of €3,500 would indicate the machine didn’t do a huge amount of work.

Also, it must be noted that 23-year-old machines are unlikely to be as economical as machines only a few years old.

I asked the contractors whom I spoke to the following: if you had a JCB digger which burned €2,500 worth of fuel in the year and it cost you €12,886 in maintenance, what would you do?

They said they’d do nothing, because they’d be out of business. One in particular laughed at me when I asked the question, asking if that even needed an answer.

To note, I used the average figures there in that example, not the machine which is the most expensive for the work done.

Can you give us an outline of what is the least efficient machine of the four JCBs?

JCB 2 burned the least fuel – that is it did the least amount of work – over the five-year period.

That means for every euro of fuel burned, it cost over €30 in maintenance. I’m aware this information about machinery might not be the most familiar to some listeners, so I’ll put it this way with an example I’ve used before.

What annual costs did this JCB have?

In March 2019, there was a pivot pin/front bucket pin assigned to the machine at a cost of over €500 for the part. It was cheaper than the one assigned three months earlier. That cost €606.25.

In April 2019, there was €287 spent on a hydra clamp and a housing. There was a similar cost assigned to this machine under the same category in 2016. It did not do a lot of work in that period, as per fuel costs.

It has to be said that the council has to keep its machinery up to a certain standard. They fulfil a very important role in keeping the county functioning. Especially during times of bad flooding and snow.

Agreed, it does cost a lot to get these 23-year-old machines up to current standards.

However, a point put to me by various contractors is: how is it economical to maintain machines which are not far off vintage status and do a relatively small amount of work at such a cost.

For the money put into the four 1998 JCBs over the period, three new JCBs could be bought.

One contractor in particular accepted that the quarter of a million spent on maintenance isn’t all available at once, but he said the yearly costs could easily cover the repayments on new or nearly-new machines.

I know that you asked Kerry County Council about the maintenance costs? And, before you read part of their response, what questions did you put to them?

I asked the council a number of questions, which you can see on our website shortly.

However, the two most pertinent were:

When did KCC last review the machinery yard, both in terms of equipment and staff requirements?

Is KCC aware of the relatively low value-for-money it’s getting from the continued use of these JCBs, considering they’re 1998 models and their resale values could well be lower than annual maintenance costs?

As you may appreciate our priority at present is to ensure that we are in a position to deliver on the largest ever funding programme for the county on the maintenance and upkeep of the road network.

The Machinery Yard in Kerry County Council manages the repair and maintenance of over 180 items of plant and there are limited occasions where extensive repairs may be required to a vehicle, to ensure that it is available to operate safely and deliver the works programme within time constraints.

On occasions where plant is operating in a challenging environment such as the machine identified by you, which is used for loading of salt for the winter maintenance programme, it can be necessary to replace parts which suffer exceptional corrosion.

The repairs can involve the procurement of costly specialist components as well as regular checks /testing of components to ensure compliance with statutory requirements on the use of such specialist equipment.

Following the fiscal crisis in 2010/2011, the Machinery Yard was operating in a very difficult and challenging environment, with a substantive reduction in funding streams for a number of years, which restricted our capacity to upgrade and replace plant.

In more recent times, with the increase in activity as well as improvements in our operations, including efficiencies achieved in consultation with our staff, the Council now has a programme for the replacement of machinery, having regard to our operating margins, and which is reviewed annually.

The replacement of plant takes into account the working history of the existing plant, the condition of the plant and the needs of the organisation to deliver on the current work programmes. Over the past two years the Council has invested €1.12m in replacement of equipment and plans further investment this year.

Whilst significant progress has been made on delivering efficiencies in operations with our staff, the negotiations with staff unions through the Workplace Relations Commission has yet to be finalized.

The council said: The Machinery Yard in Kerry County Council manages the repair and maintenance of over 180 items of plant and there are limited occasions where extensive repairs may be required to a vehicle.

On occasions where plant is operating in a challenging environment, such as the machine identified, which is used for loading of salt for the winter maintenance programme, it can be necessary to replace parts which suffer exceptional corrosion.

The repairs can involve the procurement of costly specialist components.

In more recent times, with the increase in activity as well as improvements in our operations, including efficiencies achieved in consultation with our staff, the council now has a programme for the replacement of machinery.

Whilst progress has been made on delivering efficiencies in operations with our staff, the negotiations with staff unions through the Workplace Relations Commission have yet to be finalized.

Those were the main points by the council. Does anything else stand out?

In relation to that response: yes, the council have some specialist machinery, as it has stated. Graders, road pavers, chip spreaders, vibrating rollers and the like. However, JCB 3CXs are not specialist.

Yes, there are cases where owners can purchase implements for JCBs, such as bale grabs, forks, forestry equipment, rock breakers and so on. But the only task these machines appear to be doing – judging from the council’s statement – is loading salt into trucks a few times over the winter. These machines generally do one of two things: dig material or load it into trucks and trailers.

Of course, there is no insinuation that the maintenance isn’t being carried out. It definitely is. The question is about the value for money being achieved.

Additionally, something the contractors brought up (and it has to be noted they could in the future have a conflict of interest here): the current rate of pay for a contractor to provide a machine and a driver is considered to be exceptionally low. Rates of around €25/hour have been mentioned a number of times.

Even if one machine (JCB 2) had been offloaded at the beginning of this five-year period, the maintenance cost of nearly €60,000 would have been avoided. For the incredibly small amount of work it had to do over that period, a contractor could have been hired in with their machine for those few hours. It would have represented a considerable saving for the council and the tax payer. And that’s just one machine.

The above information was aired on Kerry Today.

For an earlier story on the same topic during 2019, please click here.

For more detailed information on the machinery discussed below, open the following document: 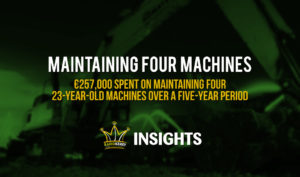 Who reported me? Seeking complainants' identities from KCC